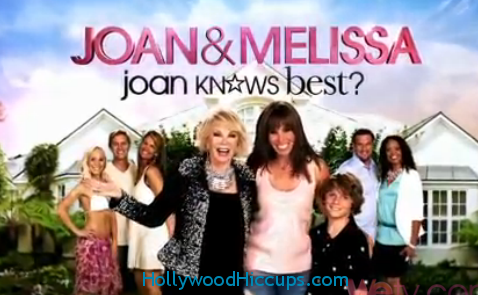 I am a big Joan Rivers fan, she is one of the funniest ladies ever.  From her antics on Fashion Police, to her time on Celebrity Apprentice, and now she’s wrapping up her first season of Joan & Melissa: Joan Knows Best.

Tonight is the season finale at 9/8c on WeTV.

Joan decides to update her will using a video camera. Meanwhile, Melissa gets terrible stomach pains – that lead everyone to believe she may be pregnant.  And Joan reveals that she’s bought a house, BUT she wants to give it to Jason and Melissa, because she’d rather stay in Melissa’s house…leaving Melissa less than thrilled. AND Jason lets everyone know he has a big announcement!  Will he finally pop the question?