The Situation Had Jokes CUT From Donald Trump Roast: Here They Are 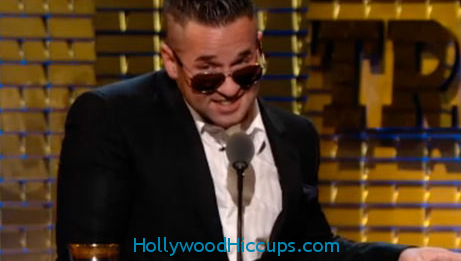 Jersey Shore star, The Situation made a complete fool of himself at the Comedy Central roasting of Donald Trump.  It was really, really bad people.  But what now makes it even worse is knowing that we didn’t even see the worst of it!  They cut a ton out! Thanks to TMZ, we get to laugh and shake our heads a little more because they got the CUT material:

“Yo Snoop, what up dawg … you know you have so much in common with Donald Trump?
Trump’s ancestors were into real estate … and your ancestors were considered property.”

He continued, “Relax, she didn’t even hear it … I mean hey, at least her mouth is good for something right? Hey, that was definitely some great work Marlee … have you ever done anything else actually?”

Sitch ignored the boos and groans and continued …

And it just didn’t stop …

“I like Larry King … he’s a playa … he actually wrote a book named ‘Mr. King Is Having a Heart Attack’ … he got that title from a hooker he was f**king.”

One last parting shot for Trump:

“Trump is a good looking dude … if your eyes are like Marlee Matlin’s ears.”

Not too sure how he will ever ‘recover’ from this one.  Ouch!