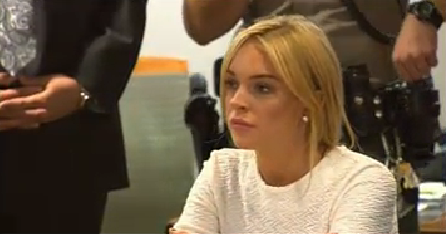 It looks like Lindsay Lohan spending time out in New York is helping clear her mind and is giving her a new perspective on her dire situation.

Up until now, Lindsay has been refusing to take a plea deal because she believes she’s completely innocent.  She had wanted to take this necklace case to trial where she was certain the truth would set her free.

Well her tune is changing because the risks she would be taking by going to trial would be huge.  If she was found guilty in the trial, she’d get more than a year of jail time for violating her probation plus PRISON time for the grand theft felony.  Lindsay hasn’t admitted guilt.  She still stands on her innocence, but she also is facing the reality of her options now.

So on Friday, she will be appearing in court again to either accept the plea deal where she will serve a very short sentence of jail time or she will go for the trial.

At this point, I’d be shocked if she didn’t take the deal.  She is going to maintain her innocence while not putting herself through another round of hell.

What do you think?  Is she going to take it?  Do you think she stole the necklace?