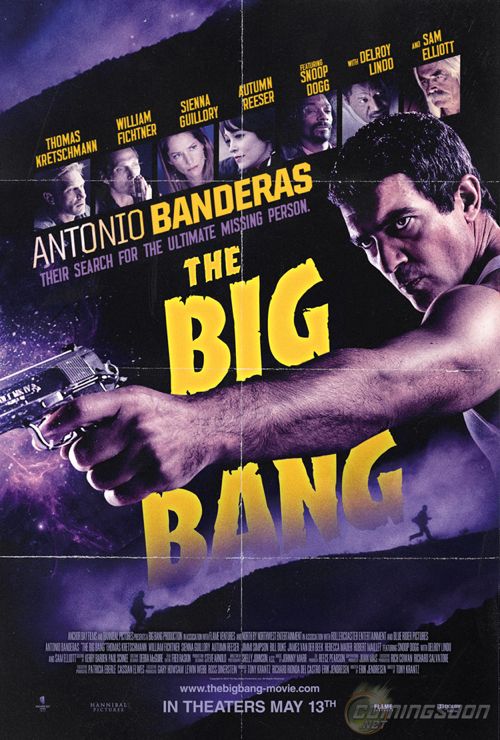 Coming Soon has our first look at the upcoming flick, The Big Bang starring Antonio Banderas in this killer movie poster.  I think the vintage look is perfect!  If you are out of the loop, here’s the lowdown on the movie:

In the film, opening in theaters on May 13, Los Angeles private investigator, Ned Cruz (Banderas) gets a visit from a recently paroled Russian boxer with an intriguing job offer: find Lexie, his missing girlfriend—and the 30-million dollar stash of diamonds she’s hiding. As Detective Cruz sets out to find her, the clues send him into the city’s seediest corners, from a Hollywood action star with a dirty little secret (Van Der Beek), to an enterprising porn producer who takes a personal interest in his own work (Dogg), and a kinky waitress with an unusual fetish for particle physics (Reeser). Lexie proves to be as elusive as she is beautiful and Cruz becomes obsessed with finding her. With time running out, Cruz discovers the trail leads to reclusive billionaire (Elliot), and his physicist (Simpson), intent on recreating The Big Bang underneath the New Mexico desert. Tailed by a trio of cops also looking to find the missing diamonds, and with the body count piling up, Cruz soon realizes that what appeared to be a standard missing person’s case is anything but, and could quite possibly bring about the end of the world as we know it.

Will you be checking this one out in theaters?