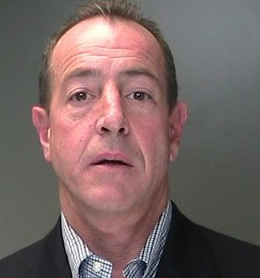 We’ve got Chris Brown going nuts over at GMA this morning, and last night we had Michael Lohan going nuts on Kate Major.  She went to the L.A. County Sheriff’s Department to file the report where the cops took pictures of her “visible injuries.”

So how did this all go down?  Kate went by Michael’s to pick up some of her belongings that she’d left there when she moved out. Michael got super pissed, threw her across the room when she turned her back, choked her out with a towel, and threatened to cut himself with a razor blade and blame it on her if she called the cops.  Great plan, douche.

When she managed to get away, she filed the report.  Then cops arrested Lohan.  He somehow had a medical emergency (chest pains) and was taken to the hospital.

Michael Lohan has bail set at $200,000 and is being charged with domestic violence, false imprisonment, and preventing the reporting of victimization.  These are all felonies.  Lohan is in big trouble here.

And just think, his daughter Lindsay Lohan will be in court on Friday, where she will most likely be checking into jail.

The Lohans are a mess.  Seriously.

The mugshot above is from a previous arrest.

UPDATE: The L.A. County District Attorney’s Office has filed a misdemeanor charge of Inflicting Injury on a Cohabitant
His bail was set at only $30,000 and he is scheduled to be arraigned on May 23.