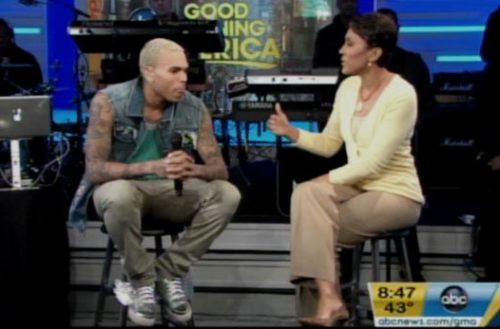 Chris Brown just proved to the world that he is NOT a changed man.  He went on a scheduled Good Morning America interview this morning and lost his mind….

Robin Roberts specifically asked Chris if she could question him about the Rihanna incident prior to the live and he agreed.

He kept trying to talk about his album and ignore the questions and then after the interview, he went nuts!  He smashed the window of his dressing room with a chair, then ripped his shirt off and left the building.

Chris Brown then ran to hie Twitter to say,

“I’m so over people bringing this past s**t up!!! Yet we praise Charlie sheen and other celebs for there bulls**t.”

Needless to say, I am certain that ABC will be finding a replacement for his performance that was scheduled for the results show on Dancing With The Stars next week.

This guy is a piece of work.  When you beat a woman, you don’t get to decided for the world that it’s over.  It will NEVER go away.  Live with it.