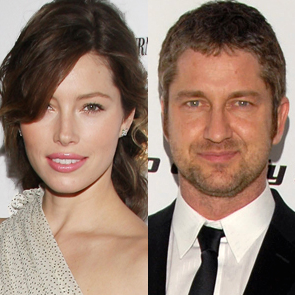 Jessica Biel and Gerard Butler are currently filming Playing the Field in Shreveport, Louisiana.  And what better place to have some sparks ignite than on set, between two celebs as hot as these two?

BREAKUP ALERT: Jessica Biel and Justin Timberlake Are Over

They are allegedly hitting it off, off set as well.  They were first spotted out for a crew member’s birthday at a Japanese restaurant on March 15th:

“When Gerry got there, he made a beeline for Jessica,” an eyewitness tells Us. “He was really flirting with her.”

Another night they were downing margaritas at a bar, then had two more dinners later in the week.

Of course being just friends would be possible…. IF it weren’t Gerard Butler we were talking about.

What do you think?  Do Jessica and Gerard make a good couple?  Or will they just be friends with benefits?