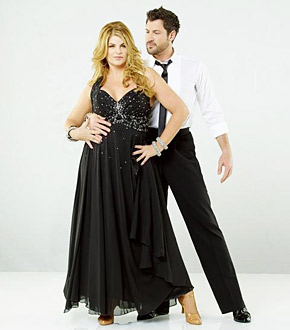 George Lopez ripped on Kirstie Alley‘s performance on Dancing With The Stars on his show.  His words were very, very below the belt….

“She did a nice job,” he joked. “Her little hooves tapping away.” He went on, “Before the show, she went to the market and then she had some roast beef and this is her going all the way home.” Lopez then played the nursery rhyme, “This Little Piggy Goes to Market” and showed a clip of a pig squealing “wheeeeeeee.”

“Don’t worry about George’s comments….just remember what happens to the big bad, drunk wolf….he falls in a boiling pot of vodka. Piggy laughs.”

“I misjudged the joke”

“No malice was intended and I apologize to Kirstie.”

Kirstie could care less about his apology now though.  This morning she responded with:

“I don’t need or want ur apology.”

“I want your kidney dude..on behalf of ur X and all the women uv insulted…give it back.”

Well done Kirstie!  You kicked ass on the dance floor and you have every right to be pissed at Lopez.  He went too far.