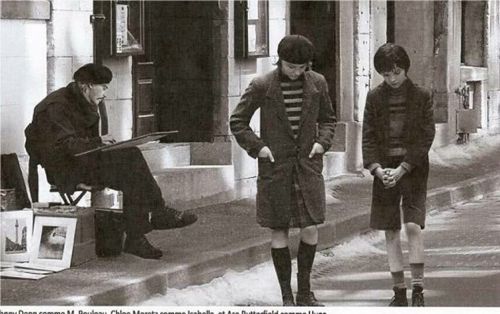 Martin Scorsese‘s latest film, is his first 3D film, Hugo Cabret.  Johnny Depp is starring and therefore I am VERY interested in this one.  Martin is a genius and Depp is brilliant.  This is going to be fabulous flick.

The photo above is a scan from an article about photographer Brigitte Lacombe in an issue of “Le Parisien” The translated caption reads: “left to right, Johnny Depp as M. Rouleau, Chloe Moretz as Isabella (sic), and Asa Butterfield as Hugo.”

Adapted from the Caldecott-winning Brian Selznick novel by Academy Award-nominated screenwriter John Logan (Gladiator, The Aviator), Hugo Cabret is the story of a resourceful boy who lives in a train station and teams up with a spirited young girl to solve a mystery that is based in his past and affects both of their futures.