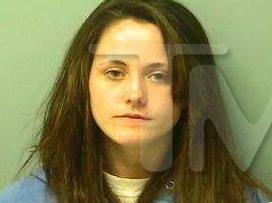 It look like little Miss Tough Guy, Jenelle Evans from Teen Mom 2 isn’t going to get away with that awful beatdown she just gave that girl Britany Truett.

Oak Island Police arrested and booked her into the Brunswick County Jail last night.  and was released shortly thereafter on bond.

A judge issued a warrant for her arrest after seeing the video… if you missed it, check it out.  It’s so wrong.

Truett was initially not going to press charges, but then changed her mind.  So Evans will be back in court on April 26th to face the charges.

Evans posted bail and is back at home now .