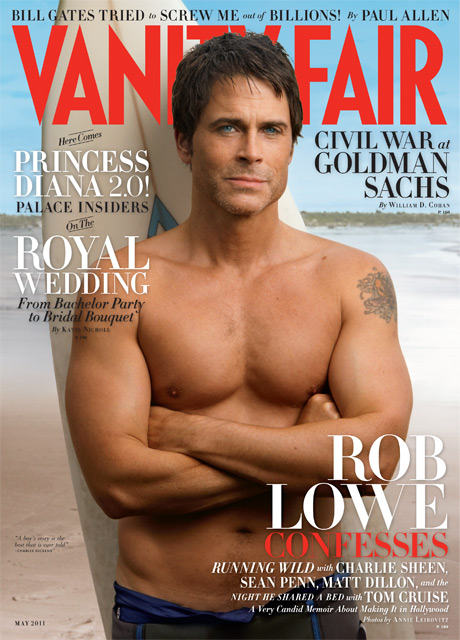 Rob Lowe looks amazing on the cover of the May 2011 issue of Vanity Fair.  The cover is hot, but the juicy interview is the best.

Rob dishes on his book, Stories I Only Tell My Friends: An Autobiography.  This is one book I won’t be passing up.  Why?  It’s fully loaded.

Charlie Sheen and Rob used to compete with each other in the “old days.”

“We competed to see who could play harder, then show up for work and still kick ass.  The verdict: Charlie by a nose.”

“One-of-a-kind,” he writes in an excerpt. “A Polo preppy clotheshorse in a world of O.P. shorts and surf T-shirts…a wonderful mix of nerd … and rebel.”

Currently, they live in the same neighborhood, but they aren’t close,

“At my house we are still saving money by not buying desserts,” writes Lowe. “At Charlie’s house, it’s never-ending Häagen-Dazs, brand-new BMWs, a lagoon pool with underwater tunnels, and a lit, professional-grade basketball half-court.”

“Open, friendly, funny, and has an almost robotic, bloodless focus and an intensity that I’ve never encountered before,” Lowe says.

Rob has no regrets from the past:

“The Brat Pack is timeless…We should all be so lucky in our lives to create things that we’re still talking about 25 years later.”

Well said.  I have a feeling this book will fly off the shelves.  Everyone wants the inside scoop on Hollywood.  This is one honest way to get it.

The book releases on April 26th and you can pre-order it now at Barnes & Noble.