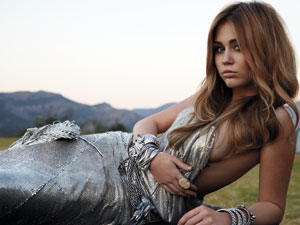 Rebecca Black has not made a believer out of  Miley Cyrus.  She’s the YouTube sensation who just got a record deal thanks to Ryan Seacrest.

Miley didn’t hold back how she really feels about Black,

“It should be harder to be an artist,” she told Australia’s Daily Telegraph. “You shouldn’t just be able to put a song on YouTube and go on tour.”

“I do not Tweet, I do not social network, I try to stay out of it,” she said. “I complain enough about people knowing too much about my private life, so to go out there and exploit myself would be silly and hypocritical.”

Then she revealed she’s got a new man!

“I don’t want to cross out the Australian boys, but I may or may not be single,” she said. “I’m definitely not coming to Australia single!”

It’s hard to argue with her about the whole Rebecca Black thing.  She is right.  She’s not jealous.  She has a point.  Now, I want to know who this new boy is!!!