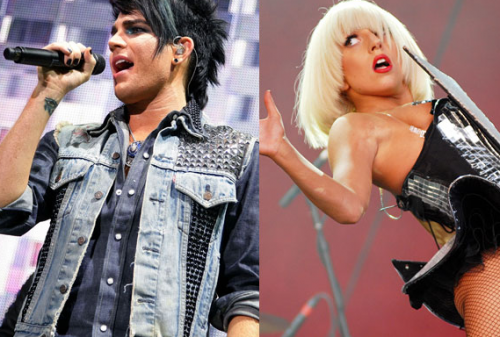 Adam Lambert made a total fool out of himself at Lady Gaga‘s 25th birthday party on Saturday night.  The guy wasn’t even invited to the bash, but came as a “guest” of Gaga’s opening act, Scissor Sisters.

Lambert was fist-pumping like a fool, smashing walls and the punched a hole in the building’s low ceiling.

“Adam acted like and an animal. He kept jumping up on the tables and chairs and screaming. When they brought the cake out he tried to smear it in Gaga’s face and put a doll from the cake in her mouth!”

Gaga asked her security to kick him out.  Later Lambert Tweeted,

“My hand still hurts. LoL” he wrote Wednesday. “Was trying for celebratory gesture 4 gaga’s B- piñata style…instead my fist is all bruised and la cita has a hole in the ceiling. #sloppy.”

What a moron!  Guess who’s never going to make the guest list at a Gaga party!?  OMG.