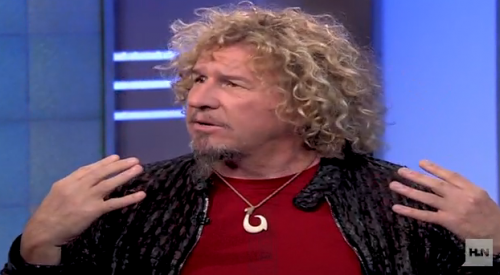 You might think he’s out of his mind… a lot of people do.  But Dr. Drew is going to figure Sammy Hagar out… at least he’s going to try!  Tonight is the premiere of Dr. Drew’s HLN show TONIGHT at 9 p.m. ET/PT.

“I’m dreaming,” Hagar begins. “I see these guys in my head … they were beams of light … there wasn’t language spoken. It was a telepathic thing.”

When Sammy woke up, he said it put him on a quest to find out his dream’s meaning.

He really believes we’re not alone.

“Anyone who says, ‘there’s no one in this universe … we’re the only life in this whole big vast universe;’ they’re crazy.”

Is Dr. Drew on board with this?!

“I absolutely agree with you,” Dr. Drew said. “I believe that life gets catapulted forward from catastrophic events in the universe… but I’ll remain skeptical of the guys with the white light.”

Check out the full interview tonight!