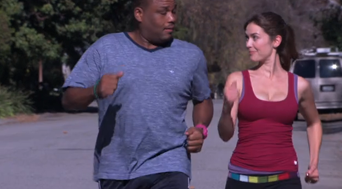 “Premiering on Atom.com on Tuesday, April 12, Matumbo Goldberg” is four-episode comedic Web series about a 33 year old marketing executive (Anderson) who is downsized and comes up with an unusual solution. He puts himself on an African adoption agency Website claiming to be a four year old named Matumbo from Nairobi. Matumbo is adopted by a clueless suburban couple called the Goldbergs (Miller and Pearlstein), who don’t believe that he is four but they think he might be 16 so they take him in anyway.

“Matumbo Goldberg,”follows Matumbo on his adventures in suburbia as he takes advantage of his new found parents and must go through the same rights of passage that any child would including getting his Bar Mitzvah, dealing with a new sister even finding his parent’s ‘sex tape’. Ultimately Matumbo Goldberg learns the value of family, a slightly messed up family, but a family all the same.

Check out the trailer below: