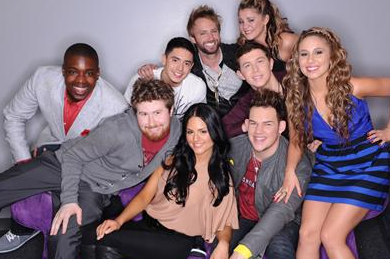 Last night was the Rock and Roll Hall of Fame theme for the American Idol Top 9 contestants.  They certainly showed up with their best of the best.  Talk about a tough competition.  I don’t remember having so many contestants be so good all in the same season.  This makes it so hard for the judges and even more so for the voters.  It’s hard to choose!

Tonight we are down to the Top 8.  Despite the fact that Stefano Langone brought his best performance last night, I think it’s too late and he will be in the bottom three.  I also think that Paul McDonald will join him there.  He also did a killer job last night.  But with all of this amazing talent, the good ones are going to start getting the boot now too.

American Idol Romance Guide: Who’s Hooking Up With Who

The one person that I really want to see in the bottom 3 is Jacob Lusk.  This of course means he won’t be.  But last night was the final straw for me.  His comments before he performed struck me the wrong way (as well as a lot of other people.)

Drop your guesses in the box below, then check back in a bit for the recap and results!

UPDATE: Stefano Langone was the first to land in the bottom three. Then Constantine Maroulis performed Unchained Melody and was brilliant!  Pia Toscano was the next into the bottom three which was of course a horrible shock.  Then to my pleasant surprise, Jacob Lusk was sent there too!  I couldn’t believe it.  Up next, Iggy Pop performed and it was wacky.  I can’t much else.  Ha!  Then came the worst news all season.  Pia was eliminated.  Everyone was shocked.  The judges were full on pissed off, especially Jennifer.  I am so upset.  I can’t believe it.  America, you got it WRONG.