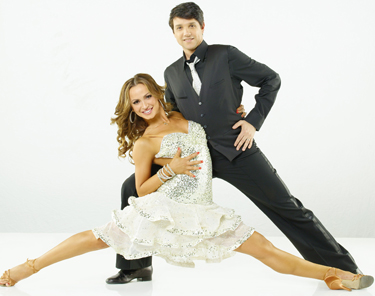 All the world was in a tizzy over the fact that Karina Smirnoff took her clothes off for the May 2011 issue of Playboy (out soon), but guess what?  She’s not going to be fired.  She won’t be punished by ABC or the Dancing With The Stars execs because they gave her the go-ahead before she did it.

Karina talked to Playboy about her reasons for doing the spread,

“I’m fearless and love the adrenaline rush.  Sexy is the confident energy a person produces,” she tells Playboy. “Sexy is the comfortable feeling of being who you are.”

Karina will be the first pro dancer from the show to pose for the magazine.  But there have been plenty of the stars on the show who’ve be naked in the mag: Brooke Burke, Kendra Wilkinson, Lisa Rinna, Pamela Anderson, Holly Madison and Denise Richards.  So I suggest you all put your stones down and enjoy the rest of the season.  You don’t have to buy the mag.