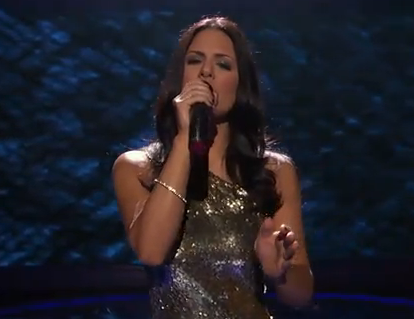 OMG.  American Idol’s Pia Toscano got so screwed on Thursady night when she was eliminated from the competition.  But then things were looking up.  She immediately signed a recording contract with Interscope Records.  Then she started dating Dancing With The Stars’ Mark Ballas. Life was feeling pretty dang good.

NOW, the ball drops.  PopEater is reporting that a former Idol contestant revealed,

“When you compete on ‘Idol,’ you must sign one of the strictest contracts in the business.  Not only does ‘Idol’ own you for the entire show and live tour that follows, it also controls everything you can do professionally for a long period after that.”

And then another source said,

“No way do the producers want a contestant who was kicked off having a hit record when the winner hasn’t even been announced yet.  The first hit song has always been from the winner and this year will be no different.  This is about protecting the brand, not about protecting Pia,” the insider says. “She can record as many songs as she wants, but ‘Idol’ will refuse to allow them to be released for now until the show is over.”

This all makes total sense.  Idol treats all of these kids like a number/$$ in the long run.  Does it make it right?  Kind of.  It’s a dog eat dog kind of world and they can’t have feelings other wise their success as a brand/show would be crippled.  Should they make an exception in this case (Pia)?  Absolutely.  Fans are demanding that they bend the rules, boot Stefano Langone and put Pia back in.  That will NEVER happen, so why not release her from their “chains” and let her get what she deserves?  A huge fabulous career in the music industry, NOW.

What are your thoughts?  Drop them in the box below: