Dancing With The Stars Week 4 Recap and SCORES 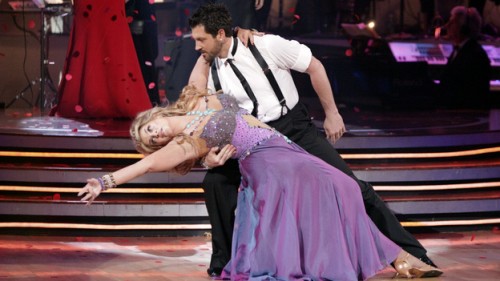 I don’t know if I am alone in this, but last night was my least favorite night so far on Dancing With The Stars.  Somehow I found most of the dances uncomfortable and sometimes painful to watch.  Maybe it’s just me …..  Anyhow, lets just do a quick recap and get you their scores.

Next up, Kendra Wilkinson did the ‘Mafia Waltz’ and it was as stiff and weird as always, maybe worse… last week she did great, this was a huge step back for her.  I am a big Kendra fan, just not on DWTS.  Scores: 6, 6, 6 = 18

Sugar Ray Leonard did the Paso Doble and his entertainment level was good, the rest was just so-so.  Scores: 7, 7, 7 = 21

Petra Nemcova came out trying to be “mean” and “mad” doing the Paso Doble and she’s too sweet for that.  But she always dances beautifully, so I give her props.  Scores: 8, 7, 8 = 23

My man, Hines Ward owned the floor again doing the Paso Doble.  The judges and audience went nuts for him.  The Terrible Towels were flying, it was fab!  Scores: 9, 8, 8 = 25

Chelsea Kane brought her A game as always and got the top scores of the night doing the Viennese Waltz… really creative and fun!  Scores: 9, 8, 9 = 26

Kirstie Alley came out looking beautiful for the Viennese Waltz, but her curse continued when her shoe came off at the beginning.  She and Maks recovered, but it was sad to see.  First time to lose a shoe in DWTS history.  Scores: 7, 7, 8 = 22

Who do you think is going home tonight?