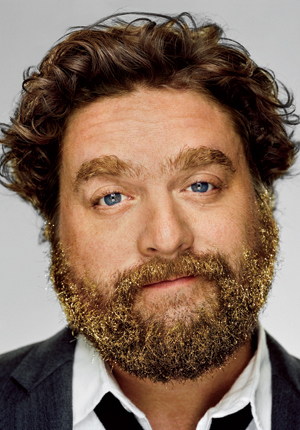 Zach Galifianakis is too funny for real words.  We all know that.  But seeing him in GQ, in this crazy freaking photo shoot is a whole new story.  You will have to grab the latest issue of GQ to read the whole article, but here’s a piece:

Zach Galifianakis is everywhere: on the internet with Between Two Ferns; on HBO with a recurring role in Bored to Death; on network television as two-time host of SNL; even in the English lexicon, since his character in The Hangover did no less than redefine the pronunciation of the word retard. He returns to the big screen this May with a reprisal of that role in The Hangover Part II, but first, Zach G took a few minutes to help us solve some of the world’s most pressing problems, by way of fill-in-the-blanks. For instance: “Personally, I think Sarah Palin is MARKETABLE and I would like to BUY her.”

Okay, now click on the photos to enlarge…. I know it’s normal for men to take baths with ducklings, right?  Oh and the plastic bag over the head is acceptable too….