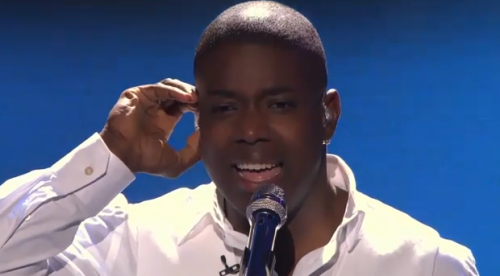 American Idol’s Jacob Lusk has a mugshot people.  He’s’ not the only Idol contestant though, Stefano Langone has one too!

So what did Jacob do?  Back in February 2009, he rode an L.A. metro train without a ticket, got busted for it, then blew off the court hearing for it.  (DUMB.)  Then when he was pulled over for a traffic stop, he was arrested when the cop saw the warrant.

Lusk ended up serving 3 days in jail for it and was also sentenced to 2 years of probation.  That was a huge problem for him because Idol won’t let you compete while on active probation.  So Lusk begged the judge to drop the probation and it worked.  So he was able to do Idol after all.

TMZ got a fun fact about Lusk’s jail time:

On night one in the pokey, Jacob sang to 170 inmates, who liked it a lot. Thing is, the guard wasn’t a fan, screaming through the loud speaker, “This isn’t a f**king singing contest.”

Undaunted, we’re told Lusk sang over the next day-and-a-half, preparing for “Idol.” And on his last day, Lusk sang a farewell song, and another guard went on the loud speaker and said it was “bad ass!”

That is hilarious.  I guess the first guard wasn’t a fan of that emo singing.