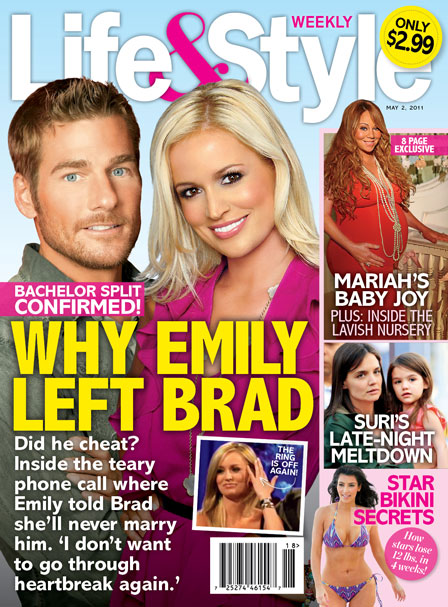 Bachelor star, Emily Maynard made a phone call to her fiancé, Brad Womack to dump him for good.

“Emily told Brad that she can’t picture them getting married,” an insider reveals to Life & Style. “Brad’s not acting like a fiancé, and she knows that he’s not going to change. Emily knows in her heart of hearts that the relationship is finished.”

“Emily was very close to moving with her daughter, Ricki, to Austin, Texas, just weeks ago, but that’s not true anymore.  She obviously feels that it isn’t the behavior of someone who plans to be with her.”

Apparently Brad put an offer on a nice home in Texas without getting her opinion first, and she wasn’t pleased.  I thought it was kind of sweet, he needs a space big enough for all of them.  But Emily is just that unstable.  She doesn’t even know what she wants.

Plus, Emily thinks that since Brad wanted to remain in Texas, which he made quite clear on the show to every girl, and because he owns bars and is in them, he must be cheating on her.

“Brad seemed very complacent all of a sudden,” says the insider. “He did everything he could to woo and charm Emily on the show, and then it just slowed. Emily knows he likes Texas, he likes his bars and booze, so she’s just wondering if he likes someone else. It started to really worry Emily. She felt like, ‘If he’s not wanting to see her, who is he with?'”

ABC won’t allow Emily to announce the permanent breakup until they feel the time is right.  So for now, she’s solidified her choice by dumping him over the phone and taking off the ring.