Dancing With The Stars Week 5 Recap and Scores 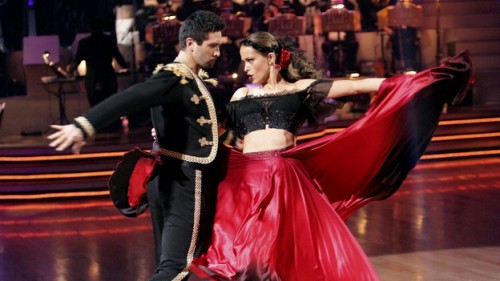 Last night on Dancing With The Stars, the theme was Americana and it was really fun!  Everyone got into it.  I found it quite refreshing after last week’s “strain.”  Tonight is definitely going to be a difficult elimination.

Ralph Macchio started the night with a Samba, dancing to Sweet Home Alabama.  I love this song in general, so watching them go off in their cowboy hats was a blast.  The judges weren’t wild about it, but it was fun nonetheless.  Scores- 8, 7, 7 = 22

Chris Jericho brought his A game with the Viennese Waltz to America The Beautiful, and we all loved it.  The judges were moved and they showed it with their scores: 9, 8, 9 = 26

Petra Nemcova has to be the sweetest star they’ve ever had on the show.  You can’t help but love her.  The judges weren’t too excited about her Quickstep to Elvis’ Viva Las Vegas, but I thought it was fun.  Scores: 7, 7, 8 = 22

Romeo did the Foxtrot to New York New York and it was fun.  I liked last week a lot more, but it was still a very strong performance.  Scores: 9,8,9 = 26

Hines Ward did a very sexy Rumba to Proud To Be An American and naturally, the judges went nuts for it….. the scores proved that: 9, 9, 9 = 27

Kirstie Alley was ready for a curse free dance and she got it.  How?  The Dance Doctor aka John Travolta stepped in to lend some words of advice and it seemed to work!  Her Foxtrot was hot!  American Woman was the perfect song choice as she and Maks tore up the dance floor and she had a blast… I enjoyed Maks’ lack of costume…. very nice touch.  Scores: 8, 7, 8 = 23

Kendra Wilkinson gave her best, most relaxed performance to date.  Rocking out to Yankee Doodle Dandy doing the Foxtrot, she smiled and had herself some fun, finally!  Scores: 8, 7, 7  = 22

Chelsea Kane was fab as usual.  Rocking the Samba to Miley Cyrus‘ Party in the USA, the judges ate it up and gave them great scores: 9, 8, 9 = 26

So what do we think?  Who’s not going to live to tomorrow?