Dancing With The Stars Week 6 Recap and Scores 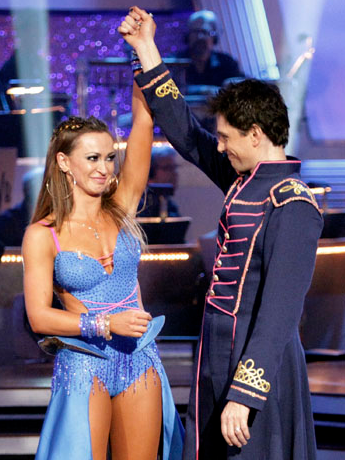 Last night on Dancing With The Stars, the theme was Guilty Pleasures and Hanson was there playing music between sets.  Overall, I thought it was a very fun night.  The stars put it all out there and we got a lot of humor mixed in as well. Tonight’s elimination is definitely going to be tough.

Kirstie Alley started the night with the Samba to Britney’s Hit Me Baby One More Time and I loved it.  She and Maks did an amazing job.  Scores: 8, 9, 9 = 26

Chris Jericho did the Tango to Journey’s Don’t Stop Believing and fell a little flat.  But, he’s staying positive, hoping for a chance to come back next week and make up for it.  Scores: 7, 8, 7 = 22

Romeo dazzled qwith the waltz to Celine Dion’s My Heart Will Go On from Titanic.  The audience and judges flipped for it and it showed up in the Scores: 10 (first of the season), 9, 9 = 28

Chelsea Kane did the Quick Step to Walkin’ On Sunshine and I have to say it was the most entertaining dance of the night.  But then again, she and Mark always put on a really good show.  Scores: 10, 9, 9 = 28

Kendra Wilkinson had her chance to shake what she’s got to the Samba and Lavida Loca.  Girl tore it up and ended with a table dance for the judges.  Very hot.  Scores: 8, 8, 9 = 25

Hines Ward did the Viennese Waltz to End of the Road by Boys II Men and he of course owned it.  He owns everything he does.  Loved it.  The judges were a bit critical though, so he’s not on top this week.  Scores:  9, 9, 9 = 27

Ralph Macchio wrapped up the night with the Paso Doble to C+C Music Factory’s Everybody Dance Now.  It was a fun performance, but Karina fell over his obnoxious coat.  They recovered well though and finished nicely.  Scores: 8, 8, 8 = 24