Dancing With The Stars Week 6 Results 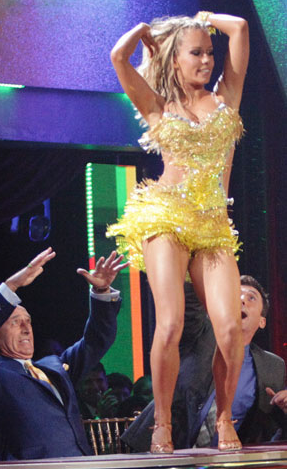 Tonight is the Dancing With The Stars fifth elimination of the season and it’s going to be the toughest by far.  The stars danced to their Guilty Pleasures last night and put on quite a show.  But who’s wasn’t good enough to let them continue?

Well, they have a two hour show full of performances to drag out the results.  So put your patience cap on!  We will be seeing more of Hanson who performed a lot last night, a piece from Rock of Ages, and American Idol castoff, Pia Toscano is singing while her boyfriend, Mark Ballas dances.  Yay!

So who do I think is going to get the boot tonight?  I am thinking either Chris Jericho or Kendra Wilkinson.  I hate to see wither one go.  But those are my guesses.  Who do you think is gone?

Check back shortly for the results!

UPDATE: During the first hour, we got a lot of “review” and guest performances.  Constantine Maroulis, Hanson, New Kids on the Black – Backstreet Boys (LOVED it!).

When the results began, Romeo was the first safe, then Chlesea was saved as well.  The encore dance was Kendra’s Samba.

Hines was the next to be safe and so was Kirstie!  Yay!

NKOTBSB performed again, then we finally got to see Pia Toscano sing while Mark and Karina danced. It was BEAUTIFUL.

Kendra was safe…… then Ralph…. which means, Chris was sent home. He’s such a sweetheart.  Sad to see him go.