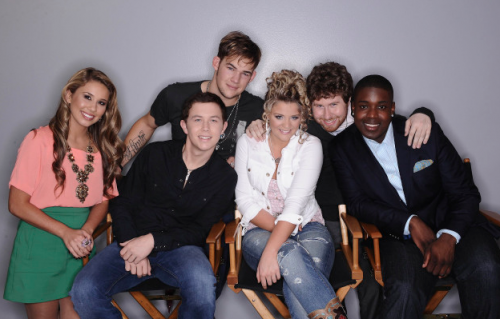 Can you believe it?!  Tonight on American Idol we are down to the final five contestants.  Last night they sang Carole King’s hits and did a great job as usual.  Tonight someone has to go home though and it’s guaranteed to be a tear-fest by the end of the show.

Performance-wise, we’ve got Crystal Bowersox, Bruno Mars lined up to perform. J. Lo was rumored to be performing, but I am not betting on that happening without ay official hype.  I am still waiting for Steven Tyler to get his skinny butt up there and perform!

If I were picking the bottom three this week, I’d have Jacob Lusk, Casey Abrams, and Scotty McCreery in there.  Then at the end, it would be Jacob going home.  I’ve been over him since day one and I think his number is up, at least it should be.  Will I be surprised if it goes in a totally different direction?  Of course night.  But I am hopeful!

Who do you think deserves to go home tonight?  As long as James Durbin and Hailey Reinhart come out ok, I am ok.

Check back shortly for the RESULTS!

UPDATE: The bottom three were unofficially my picks above.  Jacob was the first of safe of those three.   Then Casey was sent home.  This was his second time being sent off, so not a big surprise.  He’s going to be huge….Best of luck!