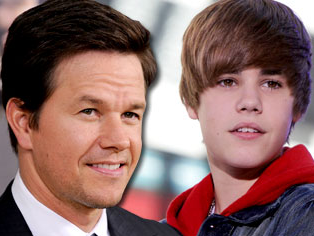 Well talk about an unexpected duo.  Mark Wahlberg and Justin Bieber?!  Yep, Mark has confirmed the rumor, so this movie is happening.   He spoke with Vulture about the upcoming film:

And is there somebody, sort of unexpected, that you want to work with?
Yeah, Justin Bieber and I are going to do a movie together …

Is that actually true?
Well, we’re putting it together. Yeah. We’re doing it at Paramount. We pitched them the idea and, you know, we’re talking about doing it. He loves the idea. He’s been sending me video, he sent me a video of himself, and, yeah, I think he’s really talented.

Can you tell me more?
No, we’re going to do something interesting.

Like a drama or a comedy?
More of a drama. It’s interesting, right? You want to know. They’ll probably announce it. They may announce it fairly soon … kind of like a reluctant mentor in an inner-city environment. You know, I don’t want to say.

Will you sing and dance?
No, I will not and neither will he.

But you could? You could throw it down.
If I had to, but I’ve, you know, that’s the last resort. I’ve worked really hard to get away from that whole thing, but you never know. I may just end up coming back full circle.

But you’ve still got the movies?
Only for my kids and my wife.

I am a huge Wahlberg fan…. Donnie and Mark and will watch anything they are in, so I am there.  Will it be weird seeing Bieber up on the screen with Mark?  Absolutely, but it could be really good.  We shall see.