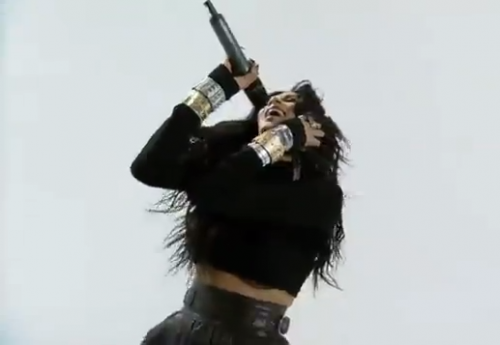 ESPN and ABC produced a special open for 2011 NBA Playoff coverage airing across the networks including Nicole Scherzinger and Jason Bonham performing Led Zeppelin’s Black Dog. The video debuted Saturday, April 16, for the start of the playoffs on ESPN and ABC.

“It was an honor to join Jason Bonham on the iconic Led Zeppelin song “Black Dog,’” Nicole commented. “I am excited that fans will be able to see the video during the NBA Playoffs.”

“Working with Nicole for the NBA Playoffs spot was amazing. She is the real deal,” said Bonham. “Not only is she one of the most beautiful people I have ever met, but she has a fantastic and powerful voice. She has a great rock voice and it worked out fantastic for ‘Black Dog.’ I was so pleased to be able to bring this song to such a huge sporting event.”

If watching this video wets your appetite for more Nicole, you’re in luck! She is scheduled to release her solo debut, Killer Love, on Interscope/A&M later this summer.