Dancing With The Stars Week 7 Recap and Scores 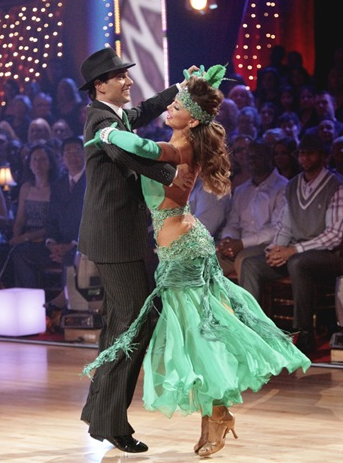 Last night on Dancing With The Stars, the contestants had a fourth judge to try and impress, pro Latin dancer, Donnie Burns.  He’s a tough one to crack!  The night started off with two group dances.  The first group was: Chelsea, Romeo, and Ralph.  They danced the Cha Cha to Lady Gaga’s Born This Way and I loved it!  The judges scores: 8, 8, 7, 7 = 30

The second group was Hines, Kirstie, and Kendra (who farted during rehearsal) and they did the Cha Cha to Ke$ha’s We R Who We R and did an amazing job.  I loved both!  The judges scores: 7, 7, 8, 8, = 30.  So yeah, it’s like that score doesn’t exist since both groups tied and that would help them in the long run when the scores are combined with the solo dances and votes.

Kirstie Alley melted down during rehearsals but pulled it all out on the Jive with her acting skills.  The judges weren’t too keen on it though… only Donnie appreciated it.  Scores: 9, 7, 6, 8 = 30/60

What did you think of the night?  Who’s going home tonight?