Kat Von D Talks About Her Past, Present, and Future 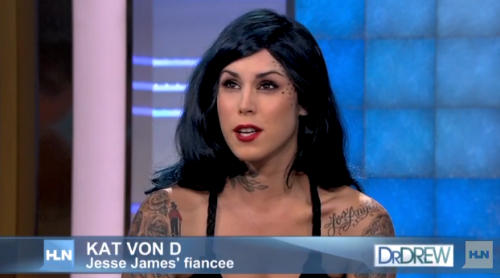 Jesse James: American Outlaw Book – His Side of The Story

“I think that I’m the perfect girl for him and vice versa…obviously everybody kind of wants to talk about, you know, the big scandal and all that stuff. But that stuff probably happens a lot and nobody really knows your walk. And it’s easy to judge and point fingers but nobody really knows.”

She even defended his past cheating,

“We’re capable of learning…you’d be a fool not to learn something — not to walk away from that situation and learn something. And I think, you know, Jesse’s a pretty intelligent guy.”

Here’s a bit from the interview:

Has any of this changed your opinion of her?