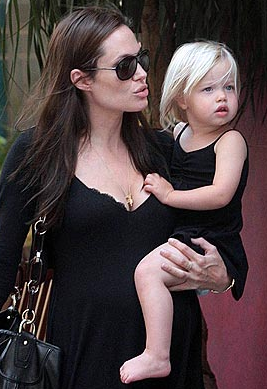 This is a pretty touchy subject.  But, Chaz Bono who used to be a girl, then got some man parts installed and took some man hormones is now blabbing about Brad Pitt and Angelina Jolie’s daughter, Shiloh who is a four year old Tomboy.  There is nothing wrong with being a Tomboy.  It doesn’t mean she has gender issues.  She’s just a little girl with her own style.  I was a Tomboy when I was little too.  I didn’t get a sex change over it.  It was a phase.  I am quite content being a woman.

“I would love to talk to [Brad and Angelina] at some point,” Bono told E! News. “To at least let them know we have this resource for them if they ever need it.”

If I was in Brangelina’s shoes, I’d be really offended and actually pissed.  I wouldn’t want my child’s name being brought into his 15 minutes of gender reassignment fame.  Completely out of line and I would definitely say something to him.