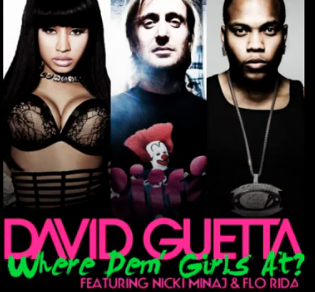 French DJ and hitmaker David Guetta’s new album is already off the hook thanks to the likes of Where Dem Girls At.  He spoke with Billboard about it:

“I’m really proud of this.  And all of this happened without any promotion, without any radio play, just based on the power of the community.” The song, in fact, had a premature release thanks to a hacker grabbing an early, unfinished version of the track and leaking it on the Internet. “We just hired some security specialist who works with the Pentagon who is going to track this guy down,” Guetta says. “I really felt disrespected. Sometimes people, when they’re downloading music, they don’t pay for it. I can almost accept that… but when someone steals records that are not finished, it’s terrible. Could you imagine a museum showing a painting that’s half-finished?”

Have a listen to Where Dem Girls At featuring Flo Rida and Nicki Minaj… love the beats!