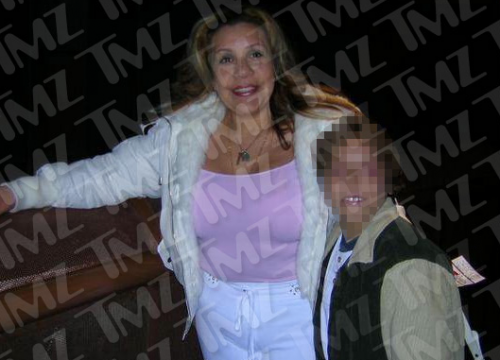 Arnold Schwarzenegger threw away his own family and started a new one with an employee who worked in his home for 20 years.  Was this his original plan?  I doubt it.  But that’s exactly what has happened.

The woman that Arnold had a baby with  is Mildred Patricia Baena (aka Patty).  She was a housekeeper/assistant who did the cleaning, laundry, cooking Arnold and Maria Shriver.

Allegedly, in the 90’s Patty started going after Arnold to get him in the sack and it worked… obviously.  The would have sex during the day at the residence.  YUCK.  Poor Maria.

Initially when Patty got knocked up, she didn’t tell Arnold.  She let him and her OWN HUSBAND think it was her husband’s.  Arnold found out it was his son when the little guy was a toddler.

When he found out, Arnold took care of them financially and still does.  Oh… what a hero.

You obviously can’t see the resemblance in the photos here, but TMZ has clearly seen the pics and says that he looks just like Arnold.  Thankfully his identity is being protected.   No reason for the poor kid to suffer just because his parents are idiots.

UPDATE:  JUST ADDED A BUNCH OF PICTURES WITHOUT THE BLUR, THAT IS DEFINITELY ARNOLD’S KID.  WOW.

UPDATE: Arnold’s son was born on October 2, 1997 at Saint Joseph’s Hospital in Burbank, CA…..so he is actually 13 years old.