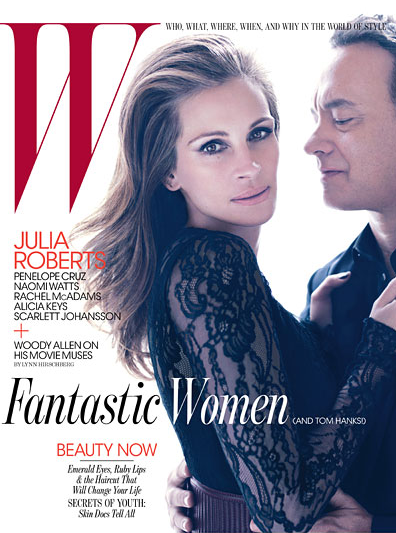 Two of Hollywood’s biggest stars, Julia Roberts and Tom Hanks are gracing the cover (and inside) of W Magazine for the June 2011 issue.  Tom is directing and co-starring in the new movie, Larry Crowne in which Julia stars alongside him.

This photoshoot is breathtaking.  I love all of these shots! (scroll down)  This duo is timeless.

Lynn Hirschberg: Larry Crowne, which you cowrote and directed, is about a man, played by you, who loses his job at a Walmart-like store. Instead of wallowing in self-pity or descending into poverty and despair, Crowne decides to go back to college. It is a profoundly optimistic movie—an ode to opportunities in the worst of times. Was that your intent?
Tom Hanks: Yes. The movie is about combating cynicism. People are naturally optimistic, but you have to choose to walk away from cynicism. You have to say, I am going to combat cynicism today. I had this idea about a unique guy who loses his job and then, at the end of the movie, realizes that it was the best thing that ever happened to him. He thought he was going to die, but it turned out great!

Is that a commentary on America?
In a way. People are afraid of change. People say, I can’t do this or that. Why? Because I’d have to change something. Well, yes: You should change. The idea of change makes them nervous, but I think change is good. Always.

At some point in your career, you changed from playing the romantic guy in Splash to the serious Philadelphia guy. How did that happen?
I told my agents that I wasn’t going to play pussies anymore. I was tired of playing, “Oh, boo-hoo—I was in love, but oh, boo-hoo-hoo.” There comes an age when you can’t do that anymore. I wanted to play men instead of boys. In your mid-30s, it’s time to start playing guys of compromise. And as you get older, men of bitter compromise [Laughs].

In this film, you’re a man of happy compromise. What was the genesis of Larry Crowne?
I wanted to make a movie about junior college, and I wanted to be in it, but I didn’t want to play the teacher. When I went to junior college, I was in classes with middle-aged housewives, guys right out of the navy, and all kinds of other people. I found that intriguing.

Were you a drama major?
God, no. I didn’t think acting was a job. I did take a class called Drama in Performance. We read plays and went and saw them performed. That was the transformational experience for me: There was no chick, no girlfriend you were trying to impress. The whole world went black, and you were one with the play.

Was theater more powerful for you than movies? What was the first movie you remember seeing?
Theater seemed more like a job; theater contained possibilities. Movies were abstract to me. In junior high, I saw 2001: A Space Odyssey three or four times in one week. During one showing, someone giggled behind me, and I turned around and said, “Be quiet—this is like going to church.” I was possessed by that movie, but I couldn’t imagine acting in it.

Lynn Hirschberg: In Larry Crowne, you play a professor at a junior college who teaches public speaking. Did you go to college?
Julia Roberts: No. This was my first college experience. And the first time I had to speak in front of a classroom, I was apoplectic. All these faces looking up at me, thinking, What is she going to teach us? I needed to find my composure. It was very hard—it was terrible, in fact.

If you went to college, what classes do you think you would take?
What did Tom say?

He said he’d take history classes.
Oh, come on—does he need to learn more history? If you cut Tom Hanks open, you would find history books. Enough with the history [Laughs]. I guess I’d take a class in homeopathy or psychology—something that I would use in my life. I did actually start taking sewing classes recently. I can wear what I’ve sewn, if I’m not in a strong wind. And I’m taking piano lessons with my kids. We can blame this new frontier on Tom Hanks. I sat next to a musician at a dinner party at Tom Hanks’s house, and I started thinking about piano lessons. In your 40s, you’re supposed to learn new things so your brain doesn’t turn to mush. So I’m practicing scales.

Were you nervous about being directed by Tom Hanks?
God, no. We knew each other socially. When I was in Rome, shooting Eat Pray Love, Tom sent me the script and said, “Tell me what you think.” I couldn’t stop smiling when I read it: It’s topical, but very positive. It contains this moment in history in a very interesting way. The movie says, You can lose your job and your way and still rescue yourself. Larry Crowne creates a self-excavated utopia, and I love that idea, that message. And Tom is so good at making fun of himself. In the beginning of the film, he’s wearing pleated khakis. No one should wear pleated khakis onscreen.

Your character is something of a mess. She drinks a little too much.
I spend a lot of the movie woozy. Why did Tom Hanks think of me when he thought of a drunken schoolteacher? What does that mean? He has me chugging margaritas. It’s hard to chug a margarita! [Laughs] I asked why it couldn’t be straight liquor, and he said it was funnier if it was a drink made in a blender.

Both you and Hanks are known for romantic comedies, and yet in recent years you’ve both stayed away from that genre.
I think it’s called growing up. Light and funny has a more compelling quality when you’re younger. But I haven’t abandoned the genre: I love falling down; I love Lucille Ball. It’s just that a lot of those stories revolve around problems that I can’t convincingly portray at this age.

Grab the latest issue of W to read the entire article!
Continue Reading