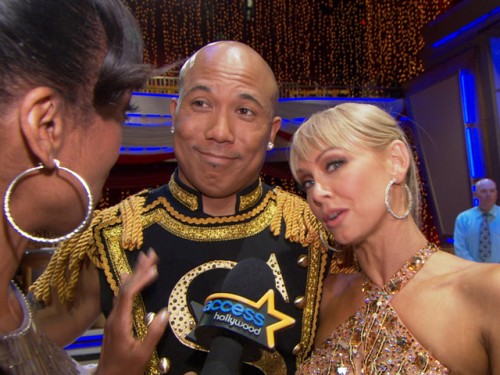 This is it!  The Dancing With The Stars season finale is going down.  We are going to see the champion take home the Mirror Ball Trophy and the title.  Can you believe the season is already ending?!  I personally think that this has been one of the best ever.  The stars were so much fun to watch and the best made it to the end… it’s been good.

At the beginning of the season, I predicted that Hines Ward would take it all the way and I am sticking with that.  After that AMAZING freestyle dance last night, I don’t know who could argue with me!  Kym Johnson and Hines have had the best chemistry that I’ve seen on the show.  Amazing.  I hate to see the show end.

I think that Chelsea Kane is an outstanding dancer and Kirstie Alley was so much fun to watch all season.  But this one is Hines’!

It’s going to be a long three hours full of performances from booted contestants and more.  We will also get a brand new performance form the Black Eyed Peas.  They are debuting Don’t Stop The Party for the first time on U.S. television tonight!

I am so anxious for the results!  Steeler Nation…. did you come through????

UPDATE:  The answer is YES!!!!  Hines Ward is champion!!!  Steeler fans are never going to let you down!  Amazing season!  Hines deserved it!  Loved every minute of it!!!  Congrats to Hines and Kym!!!!!

……..Kirstie came in second and Chelsea in third…..GREAT SEASON!