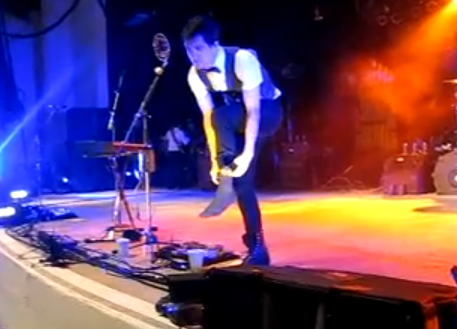 This is sooo wrong.  Panic! At The Disco front man Brendon Urie broke his left ankle this weekend while performing in Florida.  The break happened when he was climbing back on stage after going into the audience.  The dude is tough as nails though…. he finished the show!

He took off his shoe to show the audience saying,

“There’s like a softball in my ankle … my left leg is done for the show, if you don’t mind … the show will go on if you’ll have us.” and then made a joke…. “It looks like my grandma’s goiter.”

He’s okay now…. the ankle has be doctored and should heal nicely.  But STILL…… OUCH!!!