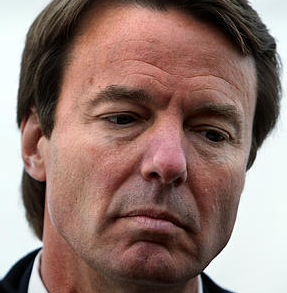 One of America’s number one slime balls got what was coming to him today.  John Edwards was indicted by a federal grand jury.  They are charging him with breaking campaign finance laws by using political funds to cover up his affair and child with Rielle Hunter while he was running for president back in 2008.

The indictment went down this morning in North Carolina on six counts, including conspiracy, four counts of illegal campaign contributions and one count of false statements.

This afternoon Edwards will appear in the United States District Court Middle District of North Carolina in Winston-Salem, N.C. There,

“John Edwards will tell the court he is innocent of all charges, and will plead not guilty. He did not break the law and will mount a vigorous defense,” Gregory Craig, lead counsel said.

Aside from the nasty affair he had with Hunter, you add the fact that his loving wife Elizabeth Edwards was dying of cancer…. it just pisses  you off.  He was blowing almost $1 million in taxpayer money to cover up his affair. Yeah, that worked out really well.

Edwards faces a maximum of 5 years in prison and a $250,000 fine for each count.  Of course he won’t serve a day behind bars because he’s a first time offender with a big wallet.

What do you think about all of this?