‘Two and a Half Men’ Puts Up NEW Banner, MINUS Charlie Sheen – Photos 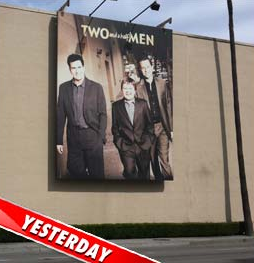 Charlie Sheen isn’t #winning anymore, is he?  Warner Bros. finished him off by taking down the big Two and a Half Men banner poster from the wall of the studio that was still up until yesterday.   They now have the rather blank one up for now (below) but are going to put up one that has Ashton Kutcher on it soon.

I guess they didn’t want to wait for the new one to be finished…. rubbing a bit of salt in Sheen’s gaping wounds must be giving them a good laugh.