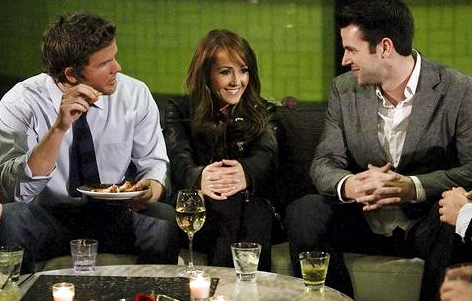 I haven’t written anything on the Bachelorette so far this season.  Aside from the guy’s bio post.  But after watching last night’s episode, I need to vent.  I have been so frustrated watching Ashley and Bentley. Seeing his diary room clips makes me want to choke him out.  I know that there have been far too many tools on this show in the past.  BUT, we have never seen anything like this.  Bentley is genuinely a very bad person.  His bad karma bank is on overload.  After finishing off Ashley last night, that guy deserves a serious beat down.  Any girl who chooses to date him now is a complete idiot and well, deserves him.

I know that the producers and Chris Harrison can’t tell Ashely, they haven’t been able to out any other schmucks in the past, so why can the now, right?  BUT, I sure wished they had.  When Chris sat down with Ashely last night, I wanted to see him show her a few of Bentley’s clips…. just to make her feel better.  Sure, it would have hurt too, but then she’s be able to get pissed and wise up.

Anyhow, enough about Bentley.  He’s gone.  He’s got it coming to him…. I wish bad things upon him.  Onto William.  I cringed watching him prep for the roast.  That was soooo very lame.  What was even more lame was whoever chose that as a date.  Can you say worst idea ever?   I know that William wasn’t doing it to be mean.  He was totally thinking laugh factor.  He wasn’t looking at the whole picture and with all the other guys playing it safe, he looked really bad.  Sure, he really did do a real roast…. but it was bad.

I was worried he wouldn’t get a rose, I actually thought he was really going to leave.  I loved him with Ashley and I hope they can get past this and keep building off that first date.

What do you think?  Are you glad he’s still around?  Would you like to street fight Bentley?