Cheating Scandal: Kim Kardashian vs Bret Lockett and In Touch 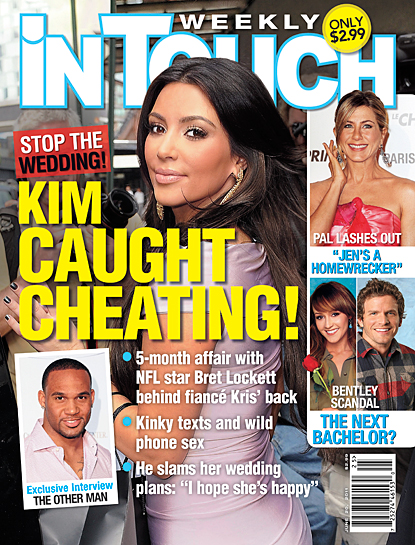 Kim Kardashian is so super pissed off at In Touch who just ran a cover story claiming she has been cheating on her fiance, Kris Humphries, with NFL player Bret Lockett and it looks like he’s behind it.  Kim’s lawyers have already come out swinging, with a letter, demanding In Touch to drop the story and that they will take legal action if they proceed.   They say that the allegations “are, at a minimum, damaging, defamatory, and an invasion of her privacy.”

Kim’s rep told TMZ that she’s never even met or spoken with Lockett.

In Touch is going to run the story in which Lockett says,

“I knew this was a game to her, and this is what she does.” Lockett adds, “She pursued me.”

So, Kim is suing the magazine and Bret Lockett.

How much truth do you think there is to this insanity?