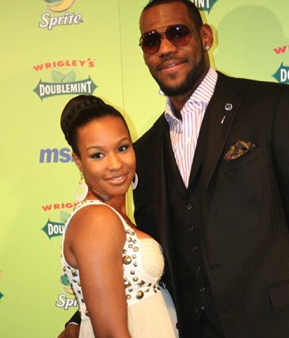 OMG.  Well there you go.  Of course this hasn’t been confirmed as of yet.  But if you’ve been watching Lebron James in the NBA finals, you’ve noticed that he’s not “all there”… so what’s his problem?  It looks like his suffering form a broken heart…. a full on pissed off mind?

The rumor is that Lebron James’ girlfriend Savannah Brinson slept with Rashard Lewis…. Hello Beautiful had this source:

I have a very reliable source who clubs and drinks with all of the athletes that come through Orlando. He was all over the Tiger Woods issue and knew what all happened with Tiger prior to it being released publicly. My buddy has a place in Orlando, Lake Nona to be exact, and he lives among some athletes that live there in Orlando. Needless to say he golfs, drinks, and parties with some of the best people in central Florida. So when word got to him while at the bar last night, he called me. Word got out while drinking with friends, that Rashard Lewis slept with Lebrons girl while visiting South Beach.

Fans don’t really want to believe it.  But why would this actually be surprising?

What do you think?  Is Lebron blowing it on the court because of personal issues?