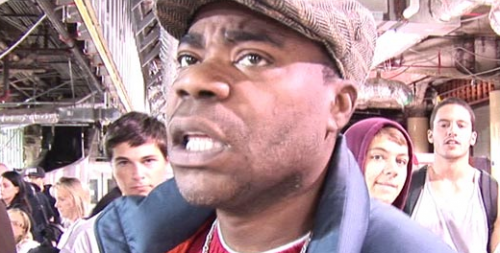 30 Rock star Tracy Morgan isn’t exactly known for his suave demeanor, and he went above and beyond his call of comedic duty last week in Nashville when he crossed the line…. repeatedly.

Morgan was performing at the Ryman Auditorium when he went off on the gays…. pretty much that was his focus…

Here are some of his very offensive jokes… be warned:

“Gays need to quit being p**sies and not be whining about something as insignificant as bullying.”

“Gay is something that kids learn from the media and programming.”

Morgan does NOT want his son to be gay and he “better talk to me like a man and not in a gay voice or I’ll pull out a knife and stab that little n**ger to death.”

In case you were wondering, no, he doesn’t care about offending anyone,

Of the Ryman Auditorium had to issue a statement after the performance, trying to save face…. like they don’t know what he’s like….

“The Ryman Auditorium regrets that people were offended by statements made by Tracy Morgan during his June 3 appearance.  The Ryman does not control the content presented by people appearing on its stage, nor does it endorse any of the views of, or statements made by, such persons.”

Morgan was booed during the performance and people were walking out.  TMZ spoke with someone who was at the show, “It was the worst thing I’ve ever heard … so not funny.”

Yeah… why even go there Tracy?  This one baffles my mind.