‘The Voice’ WINNER is Crowned 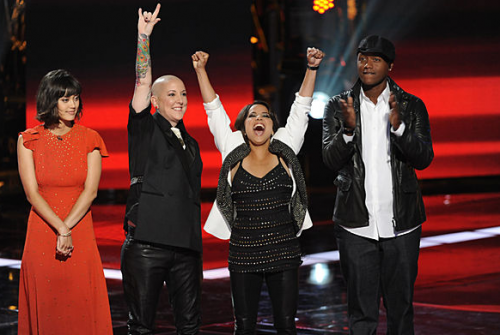 Tonight there will be just one winner on the season finale of The Voice.  This show has been the best thing to happen to NBC in ages.  Season 2 is already a done deal and that isn’t the least bit surprising.

Last the finalists gave it their last, best shot at winning the big prize in tonight’s final show of the season.  Who will win?  Well, the final four are Beverly McClellan for Team Christina Aguilera, Vicci Martinez for Team Cee Lo Green, Dia Frampton for Team Blake Shelton and Javier Colon for Team Adam Levine.

There has been amazing talent displayed each week and I haven’t been less than impressed at any point this season.  My personal favorite?  The one I can see myself picking up an album in a heartbeat?  Dia Frampton.  I love her.  Will she take it all the way tonight?

Check back shortly for the results!

UPDATE: Javier won!!! Congratulations!!  They were all great!  See you for season 2!!!