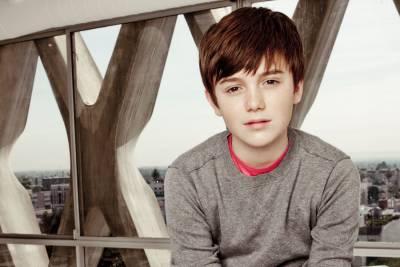 This kid is adorable!  Greyson Chance is the YouTube sensation that covered Lady Gaga’s Paparazzi and became world famous overnight.  He’s getting ready to debut his album, Hold On ‘Til The Night on August 2nd.

In April 2010, the sixth-grader posted a clip on YouTube of himself performing Lady Gaga’s “Paparazzi” at a choir event in his hometown of Edmond, Oklahoma; it went on to become YouTube’s #3 most popular video of 2010. A phenomenon among social media sites, the video was viewed by over 30 million people and led to a performance two weeks later on “The Ellen DeGeneres Show.” Only a week after that, during his second appearance on her show, DeGeneres announced that she had signed the youngster to her newly formed label, eleveneleven. The majority of “Hold On ‘Til the Night” was written by Chance: the album was recorded in Los Angeles and produced by The Matrix (Christina Aguilera, Avril Lavigne, Jason Mraz, Britney Spears) and Billy Steinberg (Enrique Iglesias, Katherine McPhee, Miranda Cosgrove).

You can catch Greyson on QVC on July 10th where he will unveil the new album…. but for now, check out his music video for Unfriend You below: