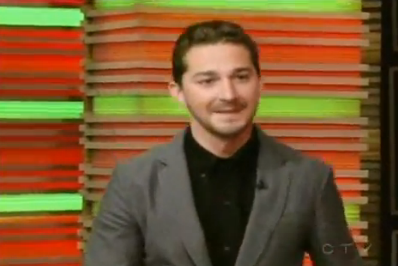 Shia LaBeouf visited Regis & Kelly to talk Transformers: Dark of the Moon and then rabbit trailed over to Marilyn Manson.. yeah…. weird.  But he did and guess what?  These two are turning into a dynamic duo for Manson’s upcoming eighth album.  He wants Shia to do a documentary on the making of the album.  You know it’s gonna be really, freaking WEIRD.  Or as Shia puts it, “eccentric.”  I call it weird.

“He’s a real sweet guy,” LaBeouf said. “He’s an eccentric human being. He lives in West Hollywood above a liquor store. There are no lights in the room. And there are these big metal doors and he opens the door and he’s in a kimono, a big pink kimono. It’s sort of like a lair. No lights, so you have to use your cell phone to guide you around. We sat and watched movies for a while and talked about what kind of visuals he wanted on his album, which are all really eccentric ideas. All things I can’t really say out loud because this is morning television.”

Watch the video…. the Manson talk begins at the 3:15 mark: