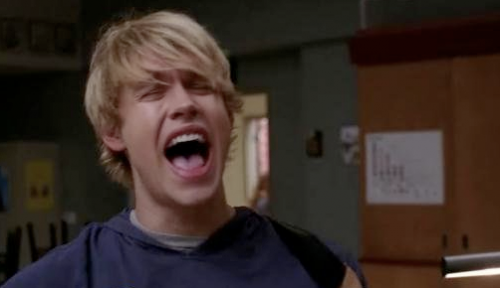 Well, sort of.  Glee season three will debut on September 20th, but it will be without Sam Evans, played by Chord Overstreet.  He Tweeted,

“Well it’s been a good year. Too bad its over. Time for summer and starting fresh.”

Don’t be too heartbroken though, they aren’t killing him off or anything, you can be sure that he will pop in here and there with guest appearances.

“We didn’t want to have a show where they were in high school for eight years,” the show’s creator Ryan Murphy told KIIS-FM’s Ryan Seacrest. “We really wanted to be true to that experience.”

“The show to me is about the way you express yourself as you start to move out into the world as a fresh, young person,” Murphy told TVLine. “Do we really want to have an eight-year [high school] senior? The only way somebody could stay on the show is if they flunk, and that is always a possibility. I think [Heather Morris’ character] Brittany is pulling straight Fs.”

Darren Criss and Harry Shum, Jr. will be signed on as regulars….so fans… there is some good news for you.

I’d love to hear what the true Gleeks think of this big change up!