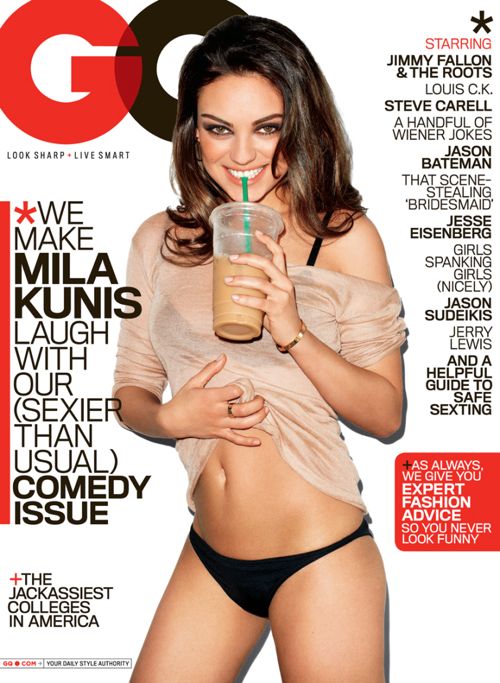 Mila Kunis is one of Hollywood’s hottest, single ladies right now.  Her last relationship was with Macaulay Culkin and she has no plans to be in a relationship any time soon.  Her schedule is too hectic…. so she’s planning to be in nomad style till January.

I say enjoy the single life for a bit.  No need to jump back in.  Have some fun!

Mila chatted with GQ about this and that as well as doing the seriously sexy photoshoot.  We love it!

GQ: Your new movie is called ‘Friends with Benefits.’ Ever been in one of those relationships?
MILA: Oy. I haven’t, but I can give you my stance on it: It’s like communism—good in theory, in execution it fails. Friends of mine have done it, and it never ends well. Why do people put themselves through that torture?

GQ: Its because they enjoy sex.
MILA: But friends with benefits isn’t a purely sexual relationship—it’s two people who like each other having sex, not a random hookup. And when two people who like each other have sex, eventually someone catches feelings and everything is f-cked. You might be able to treat our relationship as killing time. I might not. I may be in love with you.

GQ: Who’s the funniest person you know?
Mila Kunis: My father. He has such a dry sense of humor. He’d say something funny and then be like, “Kiddo, now’s the part where you laugh.”

GQ: What about someone you’re not related to?
Mila Kunis: Lucille Ball is perfection—her timing and her commitment. Sarah Silverman is raunchy and brilliant, and people call her out for saying f-cked-up stuff­ that they wouldn’t have a problem with a man saying. How dare she? Who else? Tina Fey. She’s a genius. I actually just finished reading Bossypants… I love Tina Fey. So funny, but never shticky. She’s not tripping over sh-t.

GQ: She’s so clearly attractive and successful that I can’t buy her self-deprecating stuff anymore.
Mila Kunis: I see your point. You want the attention to go to the joke itself rather than be distracted by who’s delivering it. But look at Bridesmaids. That movie’s full of beautiful women who are hysterical. I’m so proud of those ladies. You have no idea how hard it is for a woman in this business. A lot of people don’t even think women are funny. It’s f-cked-up, but you have to deal with guys like that. I’ve learned to roll with it.

GQ: Do you have a personal experience of men in Hollywood not finding women funny?
Mila Kunis: I don’t personally know of anybody, no. I could give you some bullsh-t excuse why I don’t, but I just don’t. The bottom line is if you’re an attractive female in this industry, people just take you as that: attractive. People aren’t getting the opportunity to move beyond being attractive. It’s not only with comedy. It could be with drama or action or whatever. People are distracted by looks. It happens. I’m not saying it happened to me, but it happens.

GQ: I imagine working with people like Seth MacFarlane and Jason Segel ends up involving a lot of dick jokes.
Mila Kunis: Put me at a table with five guys making dick jokes and I will be right there with them. And, uh, I’m on Family Guy. I’ve been on that show for so long that I don’t get grossed out by anything. But I’ve never had an experience where it’s been a bunch of dudes making dick jokes and I was like, “Oh, there go the boys. I’m going to go get a pedicure and be back in an hour.”

GQ: Is it harder to be funny when you’re naked?
MILA: It’s hard to be funny in general. I think I have a good sense of humor, but I’m not, like, a joke-teller. I get the jokes, which is sometimes half the battle. Believe me, I have no idea why anyone hires me… Image is not a priority for me. I have to think about how I’m going to word this…. A lot of times, people go into this industry with a grandiose idea of fame and think the only way to achieve that is to please everybody. Unfortunately, that can lead to very self-conscious on-screen choices. This industry scrutinizes you. It’ll tear you apart.

GQ: Are you single?
MILA: I am. I wouldn’t dare wish myself upon anybody at this point in my life! My shooting schedule is crazy. I’m a nomad till January.

Grab the August 2011 issue of GQ to enjoy the full article and the photos up close.