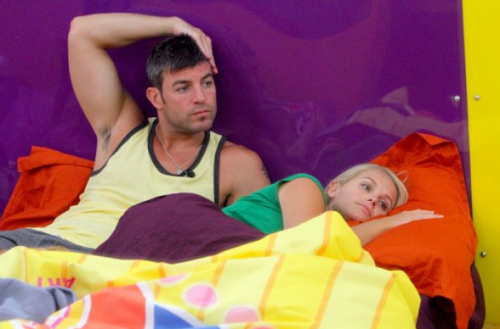 Tonight was the first eviction from the Big Brother 13 house.  Brendan and Rachel had put up Keith and Porsche.  They also won the Power of Veto and kept the noms in place.  The house seemed pretty split in their choice to vote out either of them.  Adam was totally playing both sides and went with the newbies, choosing Keith to stay in the house.  I think that he screwed himself with that vote, but we shall see.

The vote was 6 to 4, Keith being evicted and I couldn’t have been more thrilled.  He’s been my least favorite person in the house since day 1.  He’s beyond annoying and one of the biggest hypocrites I’ve ever seen.  Coming into the house professing to be a “pastor” …..Godly guy, and then behave like that… I think not.  Gag me.  So happy to see him gone.  So far I am not a big Porsche fan either, but anything is better than Keith.


The HoH competition was the one shot golfing one.  Jordan WON!  I was thrilled!  I love, love, love Jeff and Jordan.  They are so adorable, sweet, and real.  It was just like their season when Jordan won because Jeff threw it for her.  Only this time I think she really won it.

I do believe that the veterans are going to run the house.  They have Porsche on their side and I have a feeling a couple more of the newbies will get loyal with them as well.

So far this has been an intense season with all the Evel Dick drama and crazy duo twist.  I’m loving it… how ’bout you?