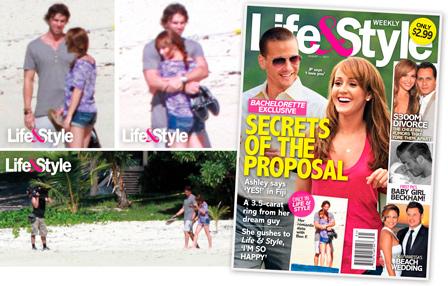 The end of this season of The Bachelorette is just around the corner and we will be moving on with Bachelor Pad 2!  So what’s going on with Ashley Hebert and her fiance?  (If you don’t know who it is and WANT to get the spoiler, click HERE.)

On the show, we are down to JP, Ben F. and Constantine.

The final rose was given and the proposal went down in Fiji at the Vomo Island Resort.  Ashley wore a long sequined pale-pink gown when her man popped the question with a modern-style 3.5-carat Neil Lane diamond ring.  She of course says yes.

This year, the producers allowed the couple to see each other a lot more than the norm to help keep the relationship alive:

“The producers have finally realized that keeping the couples apart is contributing to the quick dissolution of the relationships,” an insider told Life & Style. “So they’re trying a different tactic with these two and letting them see each other more in the hopes they’ll stay together for the long run.” So far the plan is working. In fact, Ashley’s already scoping out places to live in her fiancé’s city. “She’s been talking about moving to where her fiancé lives in the next couple of months.”

And the winner is on cloud 9 as well,

“He always has a smile on his face,” his friend said. “I asked him what it was like being on The Bachelorette, and he grinned and said, ‘It changed my life.'”

I love it!  I am so excited for them… I know who it is because I can never resist a GOOD spoiler!  And I totally think that they WILL be one of the couples that actually makes it.