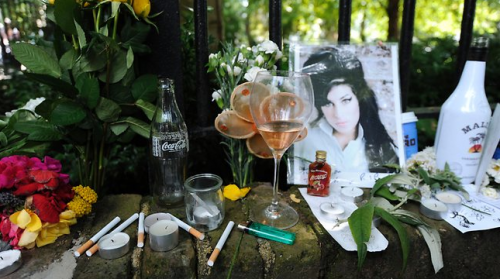 Amy Winehouse’s funeral took place today in a London ceremony where her family and dear friends said their final goodbyes.   The most touching words were spoken by her father, Mitch Winehouse when he said,

“Goodnight my angel.  Sleep tight. Mommy and Daddy love you ever so much.”

Talk about the most heartbreaking words for any parent to have to say.

“It was emotional, it was happy and it was sad.  It was everything really.”

The memorial closed with Carole King’s So Far Away, which was one of Amy’s favorite songs.

“Mitch encouraged everyone to sing to it and they did,” her rep told People. “People sang.”

After that, everyone went to the Golders Green crematorium, where they had Amy’s body cremated, in their family tradition.

“I think because her grandmother was cremated at the same place, so it was a family tradition to be cremated,” the rep confirmed.

And that is it.  Let the healing begin.

R.I.P. Amy Winehouse, you will be missed.